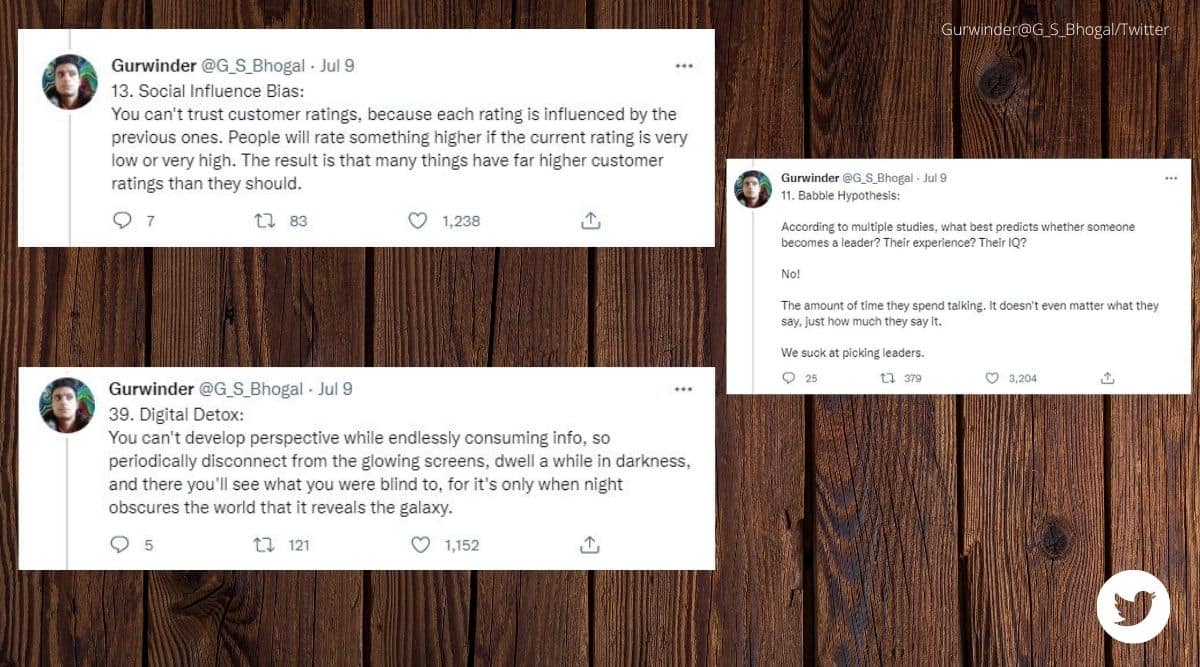 A Twitter user, Gurwinder, has shared “40 useful concepts” in a long thread, which other netizens could not help stop raving about. The concepts range from matters of the digital world, social media usage, motivational ideas, to philosophy.

Gurwinder termed it a ‘megathread’ and said it would take less than seven minutes to read through it.

My friends, a new MEGATHREAD has arrived!

In 40 tweets I’ll explain 40 useful concepts you should know.

Tweaking the term, procrastination, he used ‘procrastivity’ to describe the activity of avoiding work by doing something else that feels productive. To elucidate his point, Gurwinder gave the example of endlessly researching productivity hacks.

2. Procrastivity
We often avoid work by doing something else that feels productive so we don’t feel guilty. For example, endlessly researching productivity hacks instead of actually being productive. Beware that your brain can justify procrastination by disguising it as progress.

For social media users, Gurwinder’s advice is to not respond emotionally to trolls and toxicity. As per the “grey rock method”, while responding to trolls, “toxic people get what they want – your time and energy and it further leads to more trolls.”

The Twitter user also came up with a solution for people finding it difficult to solve their problems. According to Solomon’s Paradox concept, “people solve others’ problems easily as they are able to view them objectively. So, the hack is to imagine yourself as helping a friend.”

4. Solomon’s Paradox:
We’re better at solving other people’s problems than our own, because detachment yields objectivity. But Kross et al (2014) found viewing oneself in the 3rd person yields the same detachment, so when trying to help yourself, imagine you’re helping a friend.

In addition, as per babble hypothesis, a leader is chosen based on the amount of time he or she speaks. “11. Babble Hypothesis: According to multiple studies, what best predicts whether someone becomes a leader? Their experience? Their IQ? No!The amount of time they spend talking. It doesn’t even matter what they say, just how much they say it. We suck at picking leaders,” Gurwinder tweeted.

According to multiple studies, what best predicts whether someone becomes a leader? Their experience? Their IQ?

The amount of time they spend talking. It doesn’t even matter what they say, just how much they say it.

We suck at picking leaders.

Gurwinder also has a hack for people struggling to become creative. “Roleplay yourself as someone accomplished in the particular field like Lady Gaga, Winston Churchill and do the work as they will do,” he said.

Many users found the long thread informative. A user commented, “Brilliant thread although I’d be amazed if you can read it in 7 minutes!”

This is an absolute gem of a thread.

Anyone will be able to relate to at least 5/6 of them in real life (by hearing about it, being present in the situation, or just be knowledgeable to know about it.)

My Sunday read is done ✅ https://t.co/MNT1uFguiY

Interesting thread with some interesting wisdom. Might take a lil longer than 7 minutes to digest. https://t.co/Vn0Bo6mh1C

Some very, very good food for thought here. A lot of these ideas resonate strongly with me and I’ll be carefully looking at some of the others again. #WorthARead https://t.co/qHfT4wxDIC

QCOSTARICA – Any foreigner who defines themself as a digital nomad and who wishes to choose Costa Rica for their...

Palm Beach dentist Dr. Mitchell Josephs really enjoys talking about dentistry. To his patients. To his staff. To his fellow practitioners.And especially to...

An experienced real estate expert based in Monaco, Michele Tecchia’s blog is for anyone who wants to learn about commercial...

Sometimes it seems like social media can be a big challenge for a company. Stay too serious and boring, and...